The prompt for week 7 of 52 Ancestors in 52 week is Valentine, was there a special love story in your family. After much thought it finally occurred to me, that yes there is and it's ME!

Back in 1999 I met Raman Venkataraman. We met online in a chat room on a website called ICQ. We met there night after night and talked about a variety of things. Eventually, we exchanged phone numbers. After a few months, we decided to meet. The question was where? After all, at that time, I lived in Tulsa, OK and he lived in Bethlehem, PA. It was finally agreed upon to meet in Chicago over Labor Day weekend.

It was a whirlwind weekend with museums, boat rides and lovely dinners. We clicked! After that, he came to Tulsa over Thanksgiving weekend. This gave him an opportunity to meet one of my sons as well as my friends. This too proved to be a wonderful weekend. It was then my turn to visit PA. So over the week between Christmas and New Year's Day, I visited PA. Just as he did on his visit to Tulsa, I met his one son and his soon to be fiancé. It was a wonderful time.

But then came the big discussion about what happens now? How do we continue this relationship when we live 1200 miles apart? Neither one of us could continue with this traveling back and forth. He was a tenured professor it was not reasonable or practical for him to pack up and move. But for me it was a more reasonable expectation as I was a dental assistant and could more easily find a job.

With this decision, arrangements were made,  and the move was set in motion. On February 12, 2000 I got in my car and started the 1200 mile trek. Two and half days later on February 14, 2000 I arrived in Bethlehem, PA and started my new life!

So tomorrow, Valentine's Day 2018, marks our 18th anniversary of being us. And in July, on the 3rd to be exact, we will celebrate our 16th wedding anniversary. We've traveled the world, supported each other through cancer, surgeries, and the adjustment to retirement. Our life has been mundane as a merry-go-round and as exciting as a roller coaster. But through it all, we've laughed together, yelled at each other and still end up saying "I love you." 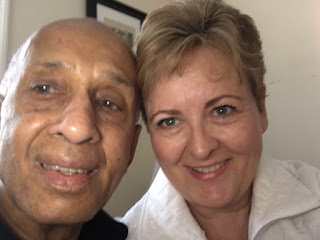 For week 6, Amy Crow's suggestion was "Favorite Name." Gosh, that sounds so easy BUT how do you pick just one? In my family none of the names for the men are terribly unusual. There's, Joel, William, Israel, Joseph, August, David, Arnold, Kevin, Patrick, Alexander, to name a few.

For the women, the names are quite typical, with Margaret, Marie, Mary, Charlotte, Martha, Louise, Sophie and on Sophronia. The most unusual, however, would have to be Mourning. For the life of me I can't find a reason or history behind using this as a first name.

For week 5, of 52 Ancestors in 52 weeks, the prompt was "In the Census." Census enumerations, depending on the year, can often give the family historian a snippet of not only their own family but a peek at the entire life of the neighborhood. But the one thing that stood out, for my family was the how our family name evolved.
August Schralla, was my 2x great-Grandfather. He was born in Stöckheim, Germany on 9 Oct 1825. His baptismal recorded his name as Johann Christian August Schütte, known as Schrell. He was born out of wedlock. The record, however, stated that his father's name was supposedly, Christian Schrell.
(Mary-Ann Vandaveer, trans., Evangelische Kirche Salzderhelden (Kr. Einbeck) ).

On 23 Nov 1860, August Schrill and his wife and infant (who was listed separately) appeared in a passenger manifest for a ship that arrived in New York from Germany.

In the 1870 U.S. Census, the family name appeared as Schriller:

It's not until the 1900 U.S. census did the family name appear as Schralla-the name I grew up with:

#4 of 52 The Pleasure of Your Company is Requested

Week Four suggestion for 52 Ancestors in 52 Weeks was "Invite to Dinner". Which ancestor would we most like to invite to dinner? My choice would be my 2x great Grandmother, Mattie A. Swilling Charles.

Born on 14 Mar 1844, Martha "Mattie" A Swilling, was the eldest daughter of John and Lucinda Shumate Swilling. She and her siblings grew up in Abbeville and Greenville Counties SC. Both of her parents died by the time she was 16 years old.

On 10 Oct 1865, Mattie married Joel D. Charles of Sterling Grove, Greenville Co. SC. Joel came from a wealthy family as the 1860 U.S. census recorded that Joel's father, Israel Charles had a personal value of over $29,000 and $7,000 in real estate value. She and Joel welcomed their first child, Lucia Permelia on 4 Oct 1866. The on 26 Jan 1869, the young family welcomed another daughter, Martha Caroline "Mattie" Charles, my great Grandmother.

But just six months later, Mattie was gone. According to a small article in the Greenville Enterprise, dated 30 Jun 1869, "Mrs. Mattie Charles wife of J.D. Charles, of this County committed suicide by cutting her throat with a knife." Mattie, apparently, left the house with her 2 year old daughter, her bible and the knife to the neighborhood spring, which was only about 100 or 200 yards from her house. Reportedly, neighbors and family could see her from the house. When Mattie did not respond to calls from her sister-in-law, she went to check on her only to find a terribly tragic scene. The article stated that "the cause of this most disturbing occurrence, is supposed to have been temporary mental aberration." The article also stated she left note.

Reading this heart wrenching letter, it's clear to me that this poor young woman was suffering from Postpartum Depression.
How I would love to put my arms around her, comfort her and cry with her.  I would love to assure her that she is a wonderful mother and wife. Motherhood can be overwhelming and I can only imagine that post-Civil War South Carolina didn't make it any easier. Plus, Joel had been a prisoner of war and had been in Union POW camp in Johnson Island, Ohio from 1863 to 1865. Did he suffer from PTSD, which of course would only have added more stress to the young mother and family.

Hmmm longevity? Do I go with the relative that lived to be 100 years old, or the great grand-mother who graduated from the Greenville Female College in 1889? I know, Jeremiah Cummings!

Jeremiah Cummings was my 2xGreat-grandfather. The first record I have for him is the 1870 U.S. census for the Town of Fayette, Seneca Co, NY. He was 30 years old, a farm laborer and had a personal value of $100, and he was born in Ireland. The last two tick marks, columns 16 and 17, indicated he could not read or write.

Enumerated with him, was his wife Mary, who was 25 years old and three daughters, twins, Margaret and Elizabeth 2 years old and infant Mary who was a month old. Also enumerated with the family was Ann Ginty, 14 years old and was designated as a domestic servant. (I will later discover that Ann is Mary's younger sister.).

The family appears again in the 1875 New York State Census for the First District, Geneva, Ontario Co, NY. In this enumeration, Jeremiah was working as a laborer and was a naturalized citizen. The records shows that the family had grown with the addition of three more children, Anna, Richard and John.

But that's the last we know of Jeremiah. For sometime after the 1875 NY State census, and before the 1880 U.S. census, Jeremiah has disappeared. In the 1880 census, Mary his wife, was now the sole provider for NINE children! The record showed that Mary was a widow, but no death record, obituary was found for Jeremiah from 1875-1880.

For the next 28+ years, the family struggles to stay together. In 1908, the family finally received word about their way word husband and father...he had died in Wichita [Falls], TX. According to a small article in The Post-Standard, Syracuse, New York dated 1 Jun 1908, "Word was received in this city to-day of the death in a private sanitarium in Wichita, Tex., of Jeremiah Cummings, formerly of this city, but of whom nothing had been heard in twenty years and who was supposed to have been dead." And though the article ended with "Communication with the authorities at Wichita are being held in arrange for burial to be announced later." Jeremiah's body was left in Texas to be buried in an unmarked grave in Riverside Cemetery, Wichita Falls, TX. Can you blame the family?

Jeremiah Cummings was 68 years old at the time of his death.

The Beauty of Deeds

In researching my James Charles family for a DAR Supplemental Application, I had to prove that Sarah Halbert, James' wife, was indeed a Halbert.  With no marriage record or probate and estate records found, I had to turn to deeds. Luckily for me, hiding in plan sight in the Essex County, VA deed books, was this wonderful document:


Clearly, it just doesn't get any sweeter than that, right?! But apparently it can! Researching all the deeds for the sale of this land,  one deed that followed a deed for the Sarah and James Charles,really caught my eye.  The deed was dated 17 Dec 1754, and it was an indenture for a young man named Benjamin Croxton, who was 12 years old. The indenture stated: "This Indenture Witnesseth that Benjamin Croxton son James Croxton late of the County of essex deceased of his own free will and by and with the Consent of John Croxton Sen. his Grand father hath put himself apprentice to Class Castone of the same County Carpenter & wheel wright the Science or trade that he non useth to be taught..."

THREE GENERATIONS! Who, I ask, wouldn't want to find this for their family? And not only do you have that information, but you have an occupation, a ante date for the death of the father, and a post date for the grandfather! From here, one could then search for probate records for the father and grandfather prior and post 1754.

And to think there are some who feel that you can't find anything in deeds!
How have deeds helped you with your family research? Found anything exciting? Please share.

The Eager Genealogist: You Picked A Fine Time To Leave Me...

The Eager Genealogist: You Picked A Fine Time To Leave Me...: Lately I have been researching my Mother's family who lived in New York. Unlike my father's family that lived and moved in the sout...
Posted by Unknown at 5:31 AM No comments: